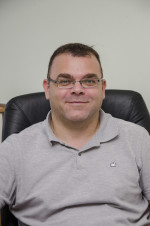 Ηe received a Diploma in Electrical and Computer Engineering (1998) and his PhD (2003) degree in Telecommunications from the Aristotle University of Thessaloniki, Greece. He is an Assistant Professor in the Department of Computer Science and Engineering in the University of Ioannina, Greece. He has been involved in EU and national funded research projects and EU funded cooperation activities in the area of wired, wireless and satellite networks. He has served as a reviewer and TPC member in several scientific journal and conferences. His research interests include networking in wireless and mobile environments such as mobile ad-hoc, opportunistic, mobile social networks as well as satellite networks, video transmission, quality of service (QoS) and network coding. He is a Member of IEEE, ACM and the Technical Chamber of Greece. He has co-authored more than 50 papers in networking journals and conferences.